by Veruschka Mungroo
in Success Stories
0

It was 1973, and South Vietnamese authorities reported that up to two million Vietnamese soldiers and civilians had been killed in the Second Indochina War, one of the bloodiest and longest battles in world history, lasting 20 years from November 1, 1955, to April 30, 1975.

Amid the violence and heartbreak on December 26, of the same year, a ray of hope was given to a young mother at the birth of her sixth child, Nhung Ngoc, meaning “velvet gem,” in a small country village in Ca Mau, a town in South Vietnam.

This hope, however, was short-lived as the reality of their situation dawned upon her. As a seamstress whose husband had been killed in the war months before, the single mother of six had to survive each day with very few or no essential human resources, such as clean water, food or clothing, on top of surviving the war. Her only possession was a shelter over their heads. But that too would soon be taken away from her after a natural disaster devastated their village.

Nhung’s mother was at her wit’s end as the family of seven faced a bleak future.

Decades later, thousands of kilometres away from her birth village, that same child Nhung is now saving lives as a successful medical doctor and has improved the circumstances of thousands of children in Vietnam and other war-torn countries.

This is the heartwarming story of Dr. Nhung Trans-Davies, a 47-year-old Albertan medical doctor who overcame poverty and near-death experiences while fleeing war atrocities to live in a Malaysian refugee camp for eight months, all before the age of five, until salvation came in the form of a Canadian refugee sponsorship.

“MOM SACRIFICED EVERYTHING TO TAKE US OUT TO SEA IN SEARCH OF HOPE AND FREEDOM – HOPE FOR A BETTER FUTURE, FREEDOM FROM WAR AND POVERTY.”

Today, she hails as one of Canada’s most successful immigrants, and she attributes her success to her mother’s sheer determination, courage, and perseverance, as well as the opportunities afforded to her by Canada.

The mother of three is also the director of the Children of Vietnam Benevolent Foundation (CVBF) – a non-profit, registered charity she founded in 2013 – a philanthropist; an advocate for social justice, particularly in the field of anti-migrant stereotypes and hate speech in politics and society, having spoken at the United Nations Council Session in Geneva, Switzerland, and a award-nominated author of five children’s book.

Immigrants Life spoke with Dr. Trans-Davies about her inspiring journey to Canada.

What were the circumstances that led your family to be forced to live in a Malaysian refugee camp?

Vietnam had been immersed in years of war. Because of the destruction from the war and hardship and oppression from the communist government that took over our country, we had little freedom of movement and food was scarce. We were often desperate to find even a grain of rice to eat. People were being robbed and killed for a bag of rice. My older brothers/sisters had to often forgo eating for the day to accommodate the younger ones.

The year we fled, we were living in a rural village in southern Vietnam. A storm flooded the region, and we were stuck in the loft of the hut for about a month because of the high flood water.

Our mom saw no future for us in this war-ravaged land, and when the opportunity came for us to escape, she took it. We sold what we had to get money to pay for our place on the boat. We had to, at one point, slide our little rowboat under a stilt house to hide from robbers who came searching for us, knowing we had a little money on hand. Mom sacrificed everything to take us out to sea in search of hope and freedom – hope for a better future, freedom from war and poverty.

“I REMEMBER THE NAUSEATING, SUFFOCATING experience in the pits of my belly from the rough seas ob the dinghy boat. people vomited, urinated and defecated where they sat because we had little or no room to move around.”

I remember the nauseating, suffocating experience in the pits of my bellyfrom the rough seas  on the dinghy boat. People vomited, urinated and defecated because we had little room to move around. For two nights, we were thrashed by the angry sea. But we were the lucky ones. Little did I know the boat that had departed mere minutes before ours had crashed and sank at sea, taking the lives of all on board.

When our boat arrived on the shores of Malaysia, a couple of Americans in the area urged us to sink the boat before the coast guards came. If we didn’t, the coast guards would drag us back out to international waters because Malaysia was inundated with refugees, and they didn’t want anymore. We heeded their advice and punched holes in the boat to sink it. The officials, therefore, had no choice but to receive us.

We had to stay at a refugee camp for eight months until a ray of hope came in July 1979 when my family was sponsored to Edmonton by  Our Lady of Mercy church group in the Enoch Cree Nation, Treaty 6 Territory.

What was your very first reaction to Canada?

When we first came through the international border gates, a young girl Adrienne came up to me and presented me with a doll. Being a young child who had very little, coming from war and poverty, that doll meant everything, and I was overwhelmed with joy. That moment had an indelible impact on my life because that doll represented Canadians’ kindness, generosity, and compassion.

To this day, I still have this doll, and it reminds me to live in honour of my sponsors and to pay forward their kindness.

My doll was temporary with the Canadian Museum of Immigration at Pier 21 and is now on a cross Canada tour (covid-permitting now, of course). 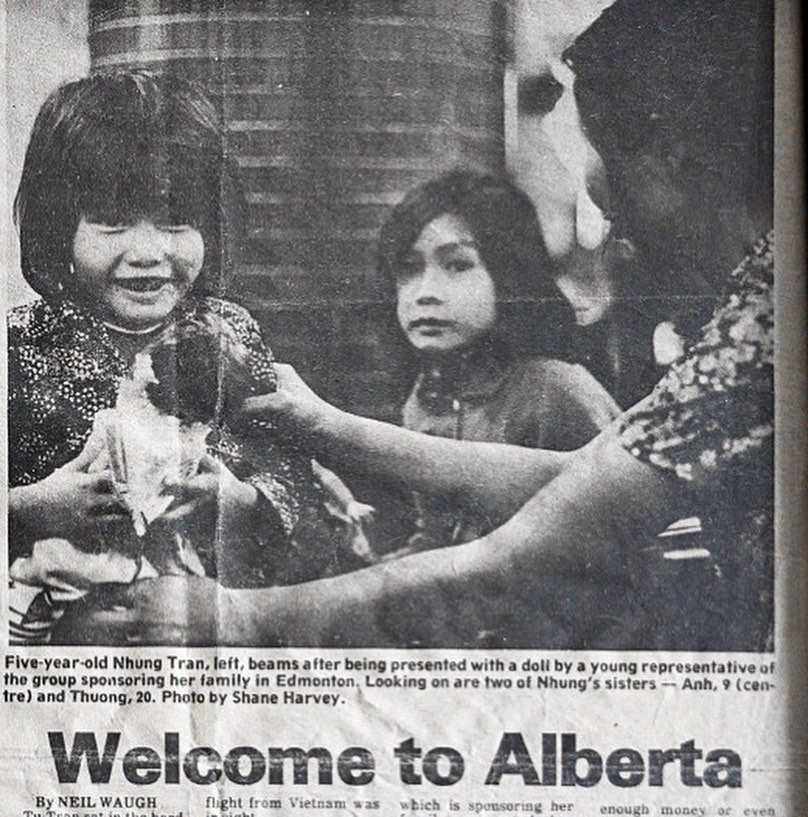 “BEING A YOUNG CHILD WHO HAD VERY LITTLE COMING FROM WAR AND POVERTY, THAT DOLL MEANT EVERYTHING TO ME. THAT MOMENT HAD AN INDELIBLE IMPACT ONMY LIFE, BECAUSE THAT DOLL REPRESENTED THE KINDNESS, GENEROSITY AND COMPASSION OF CANADIANS.”

Since becoming a doctor and award-nominated author, have you returned to your birth town, and if so, how did it feel to be back and do you appreciate Canada more?

I returned to Ca Mau, Vietnam, for the first time in 2000 during medical school to do a medical elective. I had not appreciated how fortunate I was to have been sponsored to Canada until this visit.

I saw the ongoing poverty – something as simple as running water, opportunities to go to school, getting primary medical care were all so difficult.

To see the ongoing daily struggles knowing that there were thousands of refugees who remained stuck at refugee camps elsewhere and lived in a state of ‘statelessness’ placed things in perspective for me. I felt how blessed our family was to been sponsored to Canada, a land of hope and opportunities.

What inspired you to become a medical doctor and, further, an author of six children’s books?

From a very young age, I developed a great love for science. So early on, I knew I wanted to be a physician.

I have a love for writing and a passion for words. When you’re doing what you love, finding time to do so seems to come naturally. I seek balance by pursuing both the sciences and the arts. Writing allows me to tame restless thoughts, especially when I see an injustice and concrete my imagination and creativity. 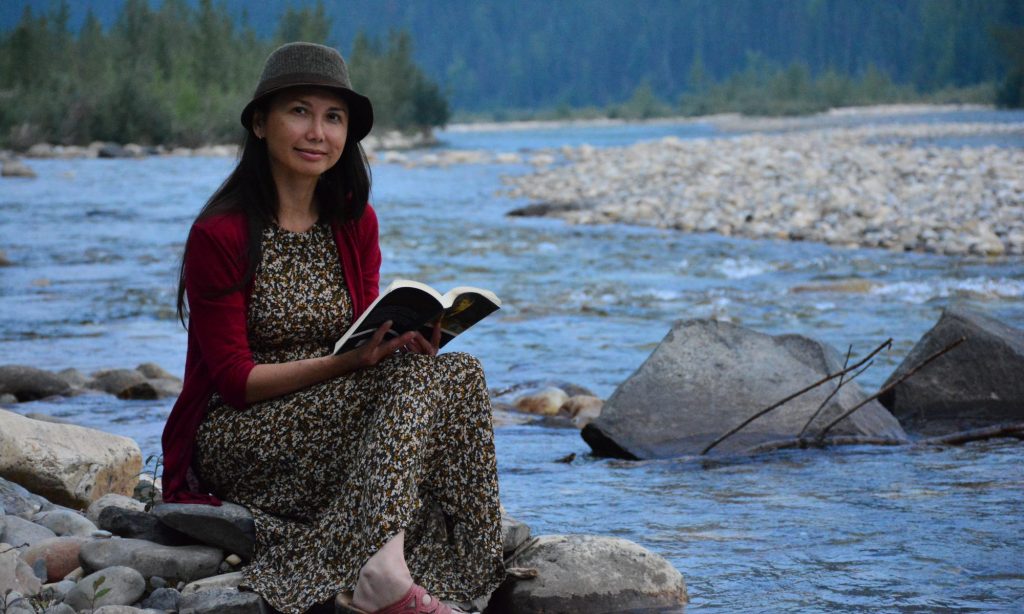 You are well known for your philanthropic activities. What inspires you to do it despite your busy schedule of being a doctor, author and mother?

With the CVBF, I felt a great need, after returning from Vietnam and seeing the ongoing poverty, to honour our parents for the sacrifices they made for a better future for us and honour our sponsors.

Coming from war and poverty, we are reminded that ‘people can take everything away from you, but they can’t take away your education. I felt that it was an injustice to squander our children’s education opportunities while kids like Malala Yousafzi were shot for wanting an education. I did what I needed to do to stand up for children’s right to a good education.

When images of the war in Syria flooded our news stations, I could not help but be moved by their plight. Seeing the thousands of desperate refugees, the crammed boats, the reports of many perishing at sea — these heart-wrenching images brought back memories of our journey. It was hard to sleep at night, in the comforts and security of our home, knowing that these children were barely surviving in makeshift refugee camps. I was compelled to do something. I gathered two groups of friends to help sponsor these refugees.

In 2017, I visited with renowned Indigenous author Richard Van Camp, and he described how Indigenous mothers struggle, as they balance between financial constraints, work, children, and their passion for writing. I felt their struggle, but at the same time, I appreciated how fortunate I am to have the financial security as a physician to follow my passion. I felt compelled, as part of the Truth and Reconciliation calls to action, to found the Kemosa Scholarship for First Nations, Métis, and Inuit Mothers Who Write because I know their stories have the power to effect much needed positive changes in our relations and understanding of ourselves and the Indigenous community.

FROM CRIES OF FEAR TO CHEERS THAT CHANGED AN ENTIRE NATION